When Apple introduced the Studio Display, it was seen as a more wallet-friendly alternative to the Pro Display XDR. While cheaper, it is still considered a premium monitor option to use with Apple’s lineup.

The result is a monitor that immediately calls for it to be compared against Apple’s high-end screen.

The first big difference that becomes apparent before the design is that the screens are of different sizes. The Apple Studio Display fields a 27-inch screen, while Porsche Design uses a 32-inch version.

Apple has its well-established and unmistakable design aesthetic on full display, consisting of a large aluminum slab. Sporting a thin bezel around the edge on the front, the Studio Display has a sealed-off aluminum enclosure with rows of perforations at the bottom of the display.

Its normal stand is reminiscent of the design of the 24-inch iMac and could easily make the display mistaken as such. The L-shaped tilt-adjustable stand can be switched out for a VESA mount adapter or a tilt and height-adjustable version.

The stand of the Porsche Design display is supposedly based on a steering wheel.

Porsche Design goes for a more conventional approach with its screen, which uses a frameless design that sneaks in the Porsche Design branding on the bottom edge.

Rather than being a cuboid, Porsche Design’s monitor tapers its sides and edges for a thin appearance. It all tapers to a large flat section, as it’s a much thicker display overall.

The screen is mounted on an aluminum stand with a unique hollowed-out appearance. Porsche Design says it is a “trapezoidal aluminum stand designed the style of Porsche steering wheels.”

If you don’t like the stand, you could always remove it and use a VESA mount. Given the target audience of this monitor, that’s unlikely.

Aside from the already-mentioned size, there’s a considerable difference in the display technology used in each monitor. 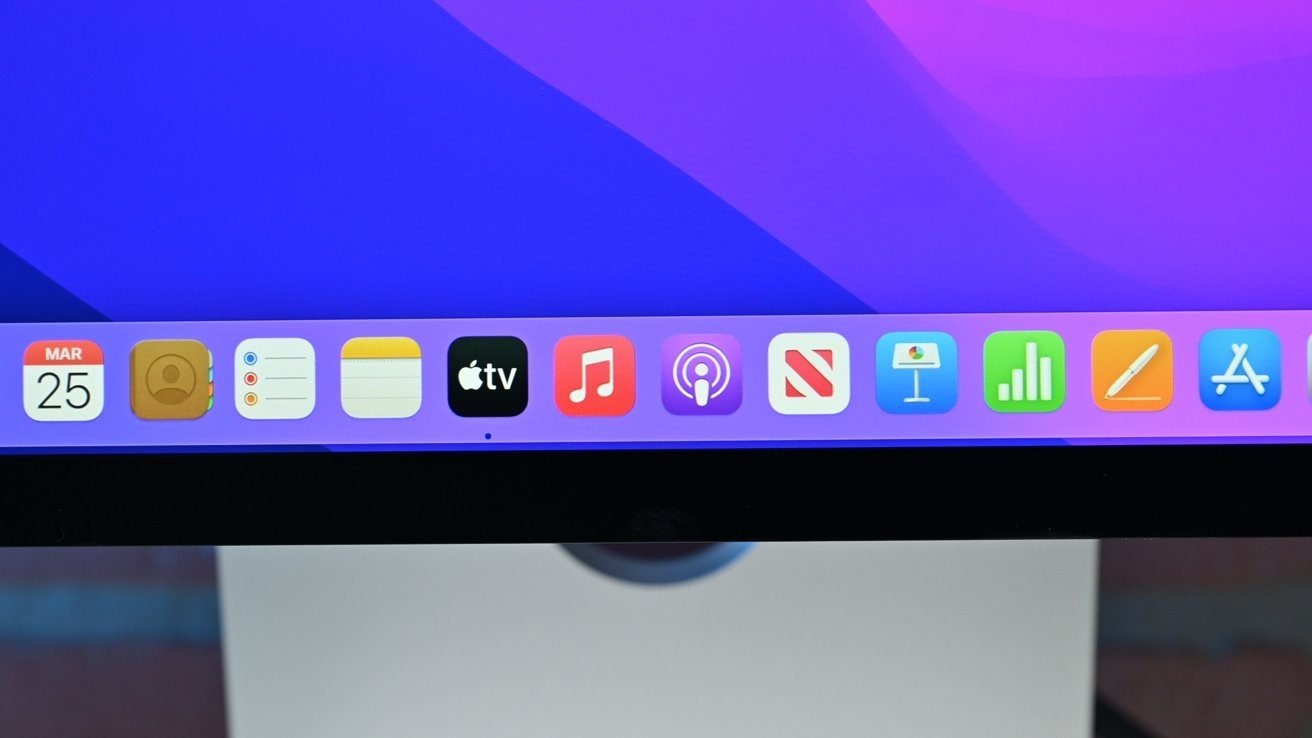 Certified to Display HDR 1,400, Porsche Design says the monitor covers 97% of the P3 color range and has a peak brightness of 1,600 nits. Apple says it has P3 color coverage, though the Studio Display only manages 600 nits.

This is almost certainly down to Apple using LED backlighting for the Studio Display, while Porsche opts for mini LED. By using higher quantities of smaller mini LEDs, a display can offer a much brighter and more uniformly lit picture than an LED version.

The use of mini LED is usually accompanied by the inclusion of localized dimming zones, as employed by the Pro Display XDR to offer users a very high contrast ratio. This is something that is especially useful for viewing HDR content.

Apple’s LED-based display doesn’t have localized dimming zones. Porsche Design hasn’t said how many zones are in use for its display, but their presence is better than not having any when it comes to high-contrast imagery.

In effect, Porsche Design’s monitor has the exact benefits that the Studio Display severely lacks, while Apple’s screen has the resolution its rival desperately needs.

Apple’s Studio Display offers fairly straightforward connectivity options, albeit in a limited fashion. Around the back are just four ports, consisting of a Thunderbolt 3 to connect to your Mac and three USB Type-C connections for peripherals.

The Thunderbolt 3 port handles the video connection and operates as the backbone for data for the 10Gbps downstream USB connections. That Thunderbolt 3 also provides up to 96W of power delivery, usable to recharge a connected MacBook Pro.

Porsche Display hides the connections in a pair of cut-out sections on either side of the stand, with the ports accessed vertically in their concealed positions. Though this may make the connections less visible, it may be more awkward for users to actively access.

On one side are the two HDMI 2.1 ports and one DisplayPort connection, while the other has one USB Type-C and four USB 3.2, along with a headphone jack. 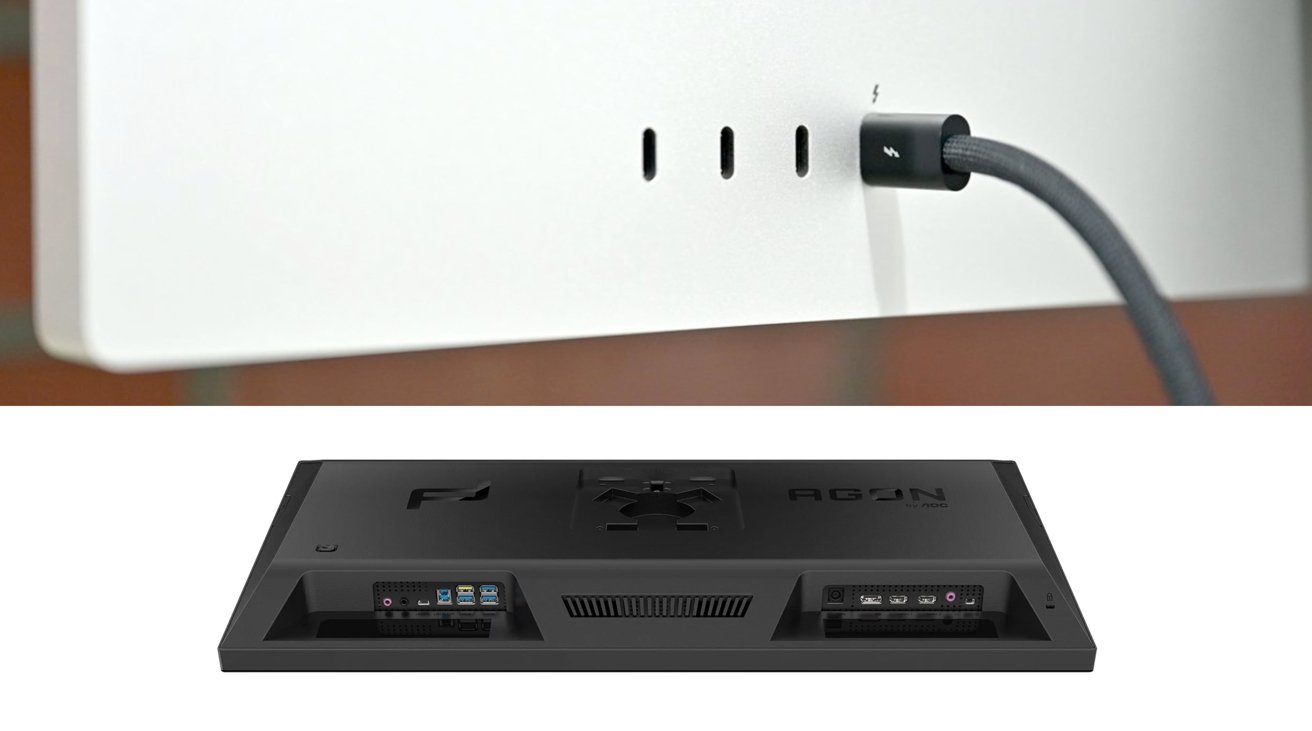 The Apple Studio Display has few ports, but they are easily accessible. Porsche Design includes many connections, but hides them from view.

It’s hard not to be on the side of Porsche Design here, at least for video inputs. Switching between three video sources is a great advantage to those who deal with multiple computing setups without needing a separate hardware switcher.

On the audio front, Apple opts for a six-speaker system with force-canceling woofers, complete with support for Spatial Audio when listening to Dolby Atmos content. Porsche Design has a pair of 8-watt speakers, which are DTS Sound-certified.

For capturing audio, Apple wins here since it includes a three-mic array of studio-quality mics with directional beamforming and support for “Hey Siri.” Microphones are absent from the Porsche display.

It’s a similar story for the webcam, as while Apple uses 12MP Ultra Wide camera with Center Stage, there’s not a camera on the opposing screen. 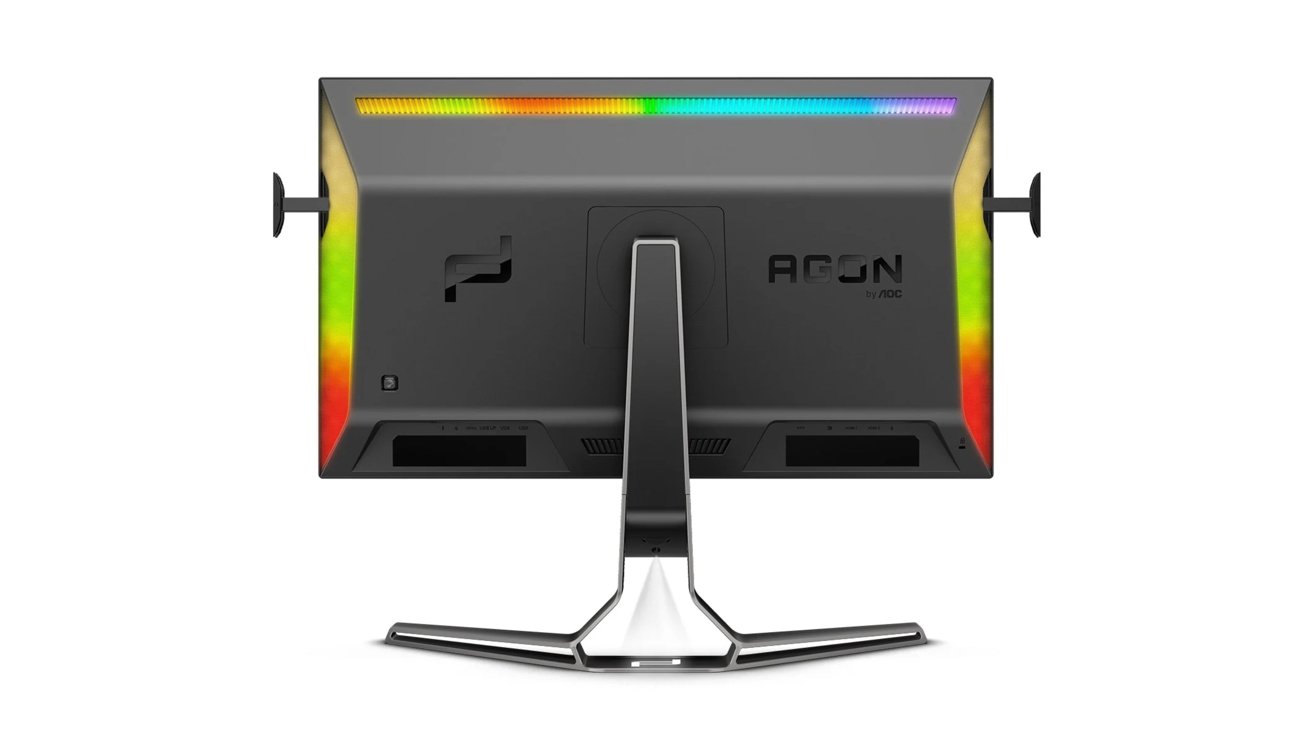 Porsche Design included RGB lighting in the back of its monitor, so it can illuminate nearby walls.

Porsche Design includes RGB lighting, a common staple of gaming monitors. There are light effects on the tapered side edges and the top edge, which can illuminate a rear wall.

There’s also an LED logo projection, though it appears more to be another place to put the Porsche Design branding.

Porsche Design also includes a Wireless Quick Switch, a remote control that can change video sources and manage the screen menus without needing to fiddle about with built-in buttons. 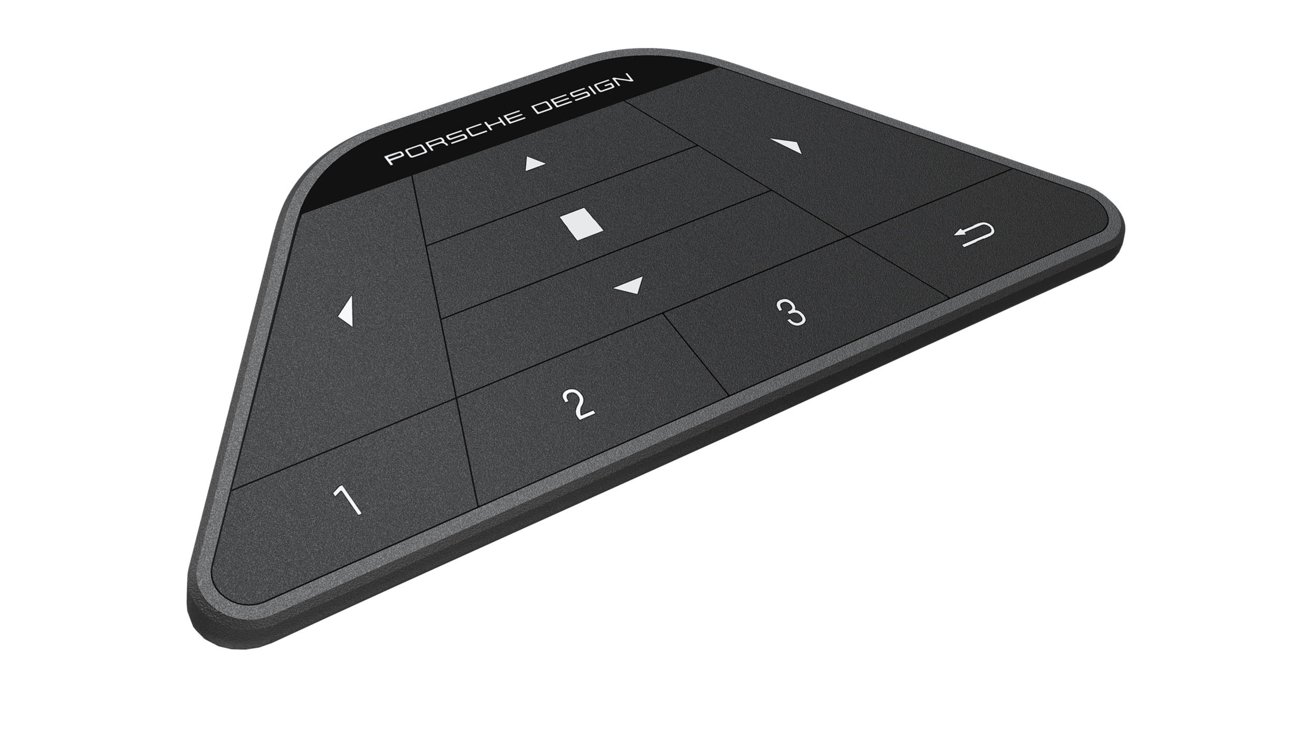 Lastly, there’s an included headset holder consisting of hooks on either side of Porsche’s monitor, giving you a place to hang up your headphones. Mercifully, they can be removed for those who prefer a cleaner physical appearance for the monitor.

Apple sells its Studio Display for $1,599. If you want a Nano-texture glass coating to minimize glare, that will cost you an extra $300.

The most expensive variant would be adding the Nano-texture glass and the Tilt and height-adjustable stand, bringing it up to $2,299.

The Porsche Design AOC Agon Pro PD32M is priced at $1,799, including the stand.

The Apple Studio Display and Porsche Design’s work with AOC focus on offering a premium viewing experience for Mac and PC users. One that provides a thoughtfully-designed monitor with decent specifications at a reassuringly expensive price.

Each screen goes down the same route but diverges at key points.

For display technology, you have Apple going for a high resolution at the expense of HDR and brightness, while Porsche Design opts for a bigger display with HDR but doesn’t match the Studio Display’s resolution.

Apple arguably leads in having a nice and sleek design that matches its design aesthetic, while Porsche goes a little more conventional with its screen. That is, aside from the steering wheel-inspired monitor stand.

While Apple offers a webcam and microphone capability, Porsche instead provides the ability to connect multiple video sources and easily switch between them. 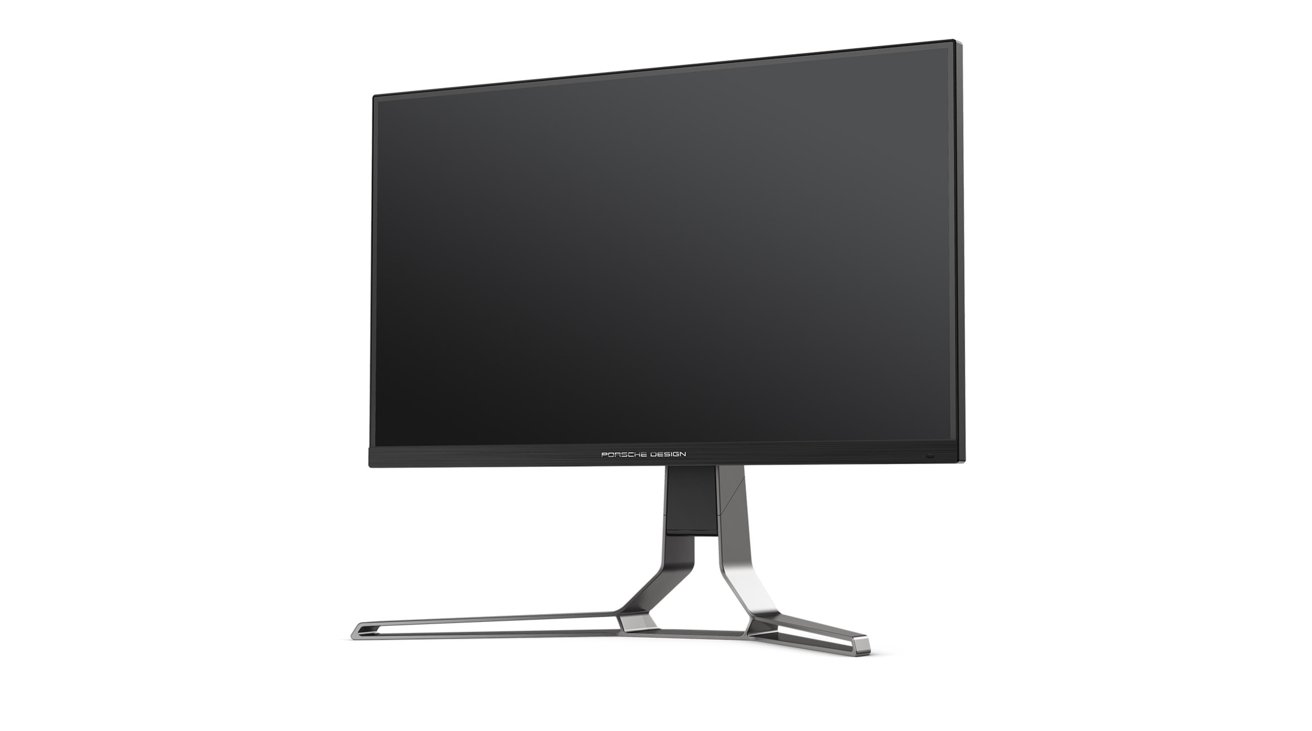 It would be nice to have a display that offers the best of both worlds, but that isn’t either of these two displays in their current state. You could argue that the Pro Display XDR is a good fit for that description, but certainly not when it comes to price.

The decision for the buyer is ultimately going to be Apple aesthetics and resolution versus the Porsche brand, physical size, brightness, and HDR. Whichever the hypothetical customer buys, they’ll have a pretty decent monitor by most standards.

It’s just not going to be a monitor that can do it all. At this price range, that’s something you’d pretty much expect to get.

Porsche Design sells the AOC Agon Pro PD32M through its online store, with it available to preorder for $1,799 ahead of its expected availability on June 15.

Readers can save $50 on the Apple Studio Display at Apple Authorized Reseller Adorama. To activate the promotion, you must shop through this cost-saving activation link and enter promo code APINSIDER during checkout. Step-by-step activation instructions can be found on this help page.

Want to see how the offer stacks up? Comparing prices across leading Apple resellers is easy in our Apple Display Price Guide.