Zhiyun’s updated design of its Weebill 3 gimbal results in its most comfortable and powerful gimbal, which is also more useful for amateur videographers and vloggers.

Zhiyun has an extensive range of gimbal styles across its entire catalog. Everything from smartphone-specific models like the Smooth 5 to the mid-range Crane M3 to the professional market with the Weebill 2.

For its latest release, the Weebill 3, Zhiyun is still pitching the gimbal at professionals who need to film with DSLRs and mirrorless cameras. However, it is also introducing several quality-of-life changes to make it more user-friendly.

These features are chiefly in ergonomics and in extra features to make it more of an all-rounder in other areas than just video stabilization.

Like its predecessor, the Weebill 3 is a compact gimbal that packs small for transportation. Folded down, the three-axis gimbal measures 13.4 inches long by 8.1 inches wide and 2.85 inches thick, making it very compact.

It’s also reasonably light at 2.4 pounds for the gimbal alone, with items like the quick release plate and other accessories bringing the entire package to not much beyond 3.2 pounds. This is practically the same weight as its predecessor, which itself was a small and easily-carried gimbal.

The full setup of the Zhiyun Weebill 3 with a camera and two accessories.

It also has the same core design cues as the original for its construction, with matte black metal arms attached to an equally sturdy rubberized handle.

The critical departure for the Weebill 3 is its main body design, as the previous inverted L has been flipped around into more of an L-shaped handle, with the main extra mass below the hand instead of above it. This is a good move as it creates a large flat pommel-style section underneath where the user grips their right hand.

In practice, this results in a gimbal that won’t as easily slip out of the user’s grip when moved quickly or held at awkward angles. 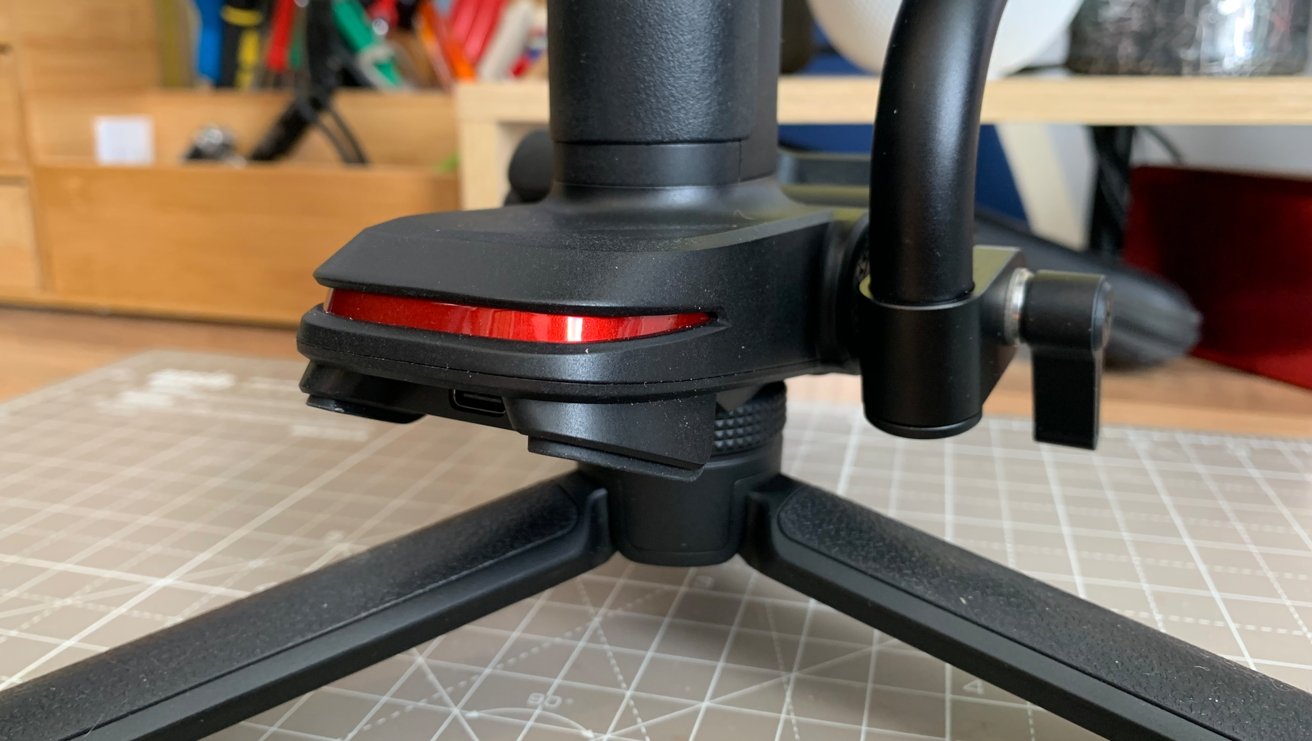 The new foot of the Zhiyun Weebill 3 helps with grip and can help balance the gimball on flat surfaces.

The extended base has some rubberized feet, so it can stand on its own if balanced just right. Thankfully, Zhiyun includes a low-profile TransMount Handheld Tripod to attach to the base and to stand it upright securely.

Along with making the Weebill 3 less likely to slip from the user’s grasp with the pommel section, Zhiyun also offers a pair of accessories for the model.

An attachable wrist rest can be acquired that attaches to one of the two attachment points near the gimbal’s base. Padded with a thick rubberized cushion, the wrist rest cushions the bottom of the wrist and a little bit of the forearm. 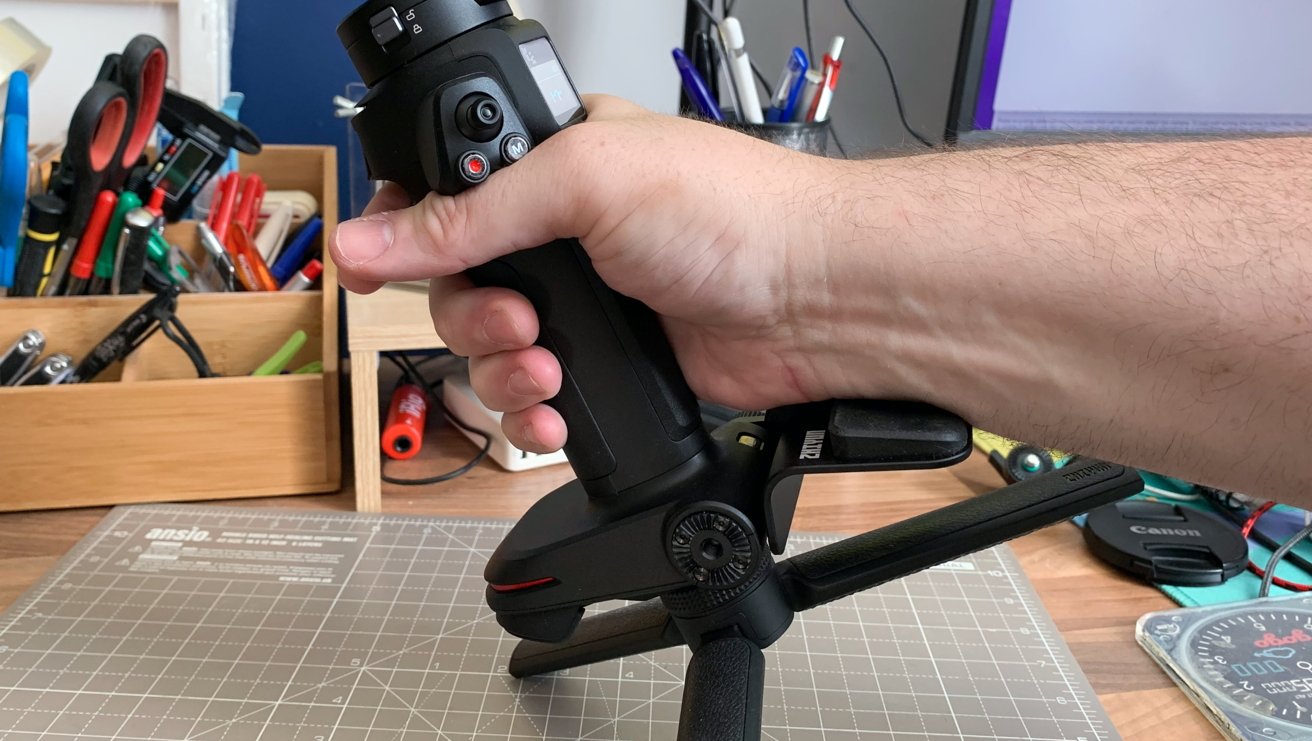 The weight of a gimbal and camera assembly can be tiring to hold for long periods and can cause pain to the wrist in some cases. Instead of stressing the wrist, the wrist rest pressures the grip and pushes upwards below the wrist.

This change in how it affects the wrist means you’ll be able to use it for far longer before needing to rest your arm. 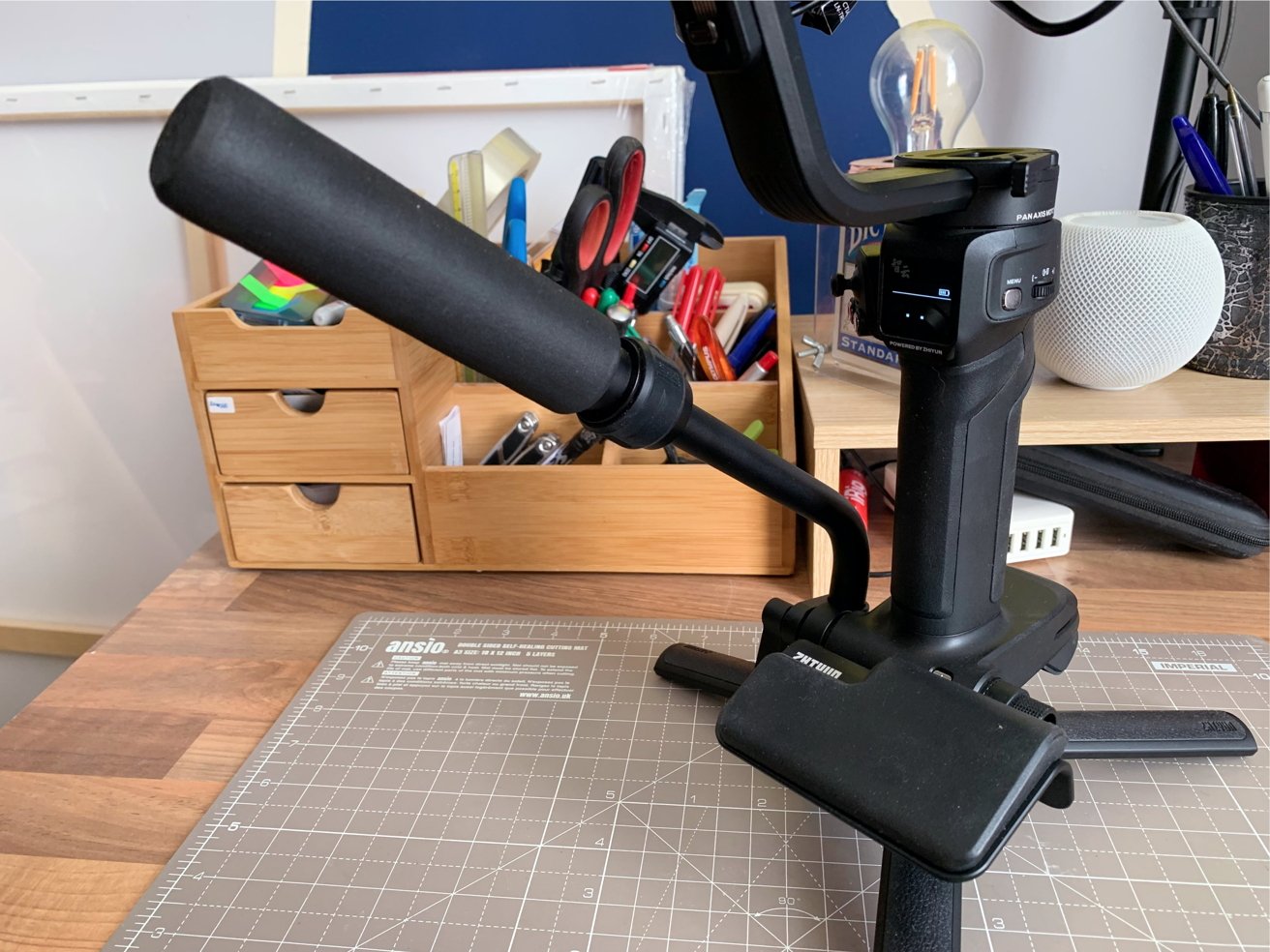 The Sling Grip handle is retractable.

While this gives you a second handle to hold onto the gimbal with instead of the folded-up tripod, it also offers a few options regarding angles, depending on how you want to grip it. It’s also extendable, fixed in place by a tension ring, so it can be quickly lengthened and shortened depending on what you need for a shot.

Unlike the wrist rest, the Sling Grip’s cushioned handle is more foam-like in texture than the rubber used elsewhere, which makes it a little out of place in the design. It’s still comfortable to use, and it would be unsurprising if serious users will end up adding their own grip material to the arm.

On the top of the Weebill 3 is a series of three rotating joints and arms that are pretty close to what was provided with the Weebill 2. Each joint handles the mounted camera’s roll, tilt, and pan axis when in use.

Like the previous model, it is designed to take a heavy load in the form of a DSLR or mirrorless camera and an accompanying heavy lens. While there is no official word on what weight of camera assembly it can ultimately take, it was comfortably able to manage a big camera and lens combo that weighed in at just under 3 pounds. 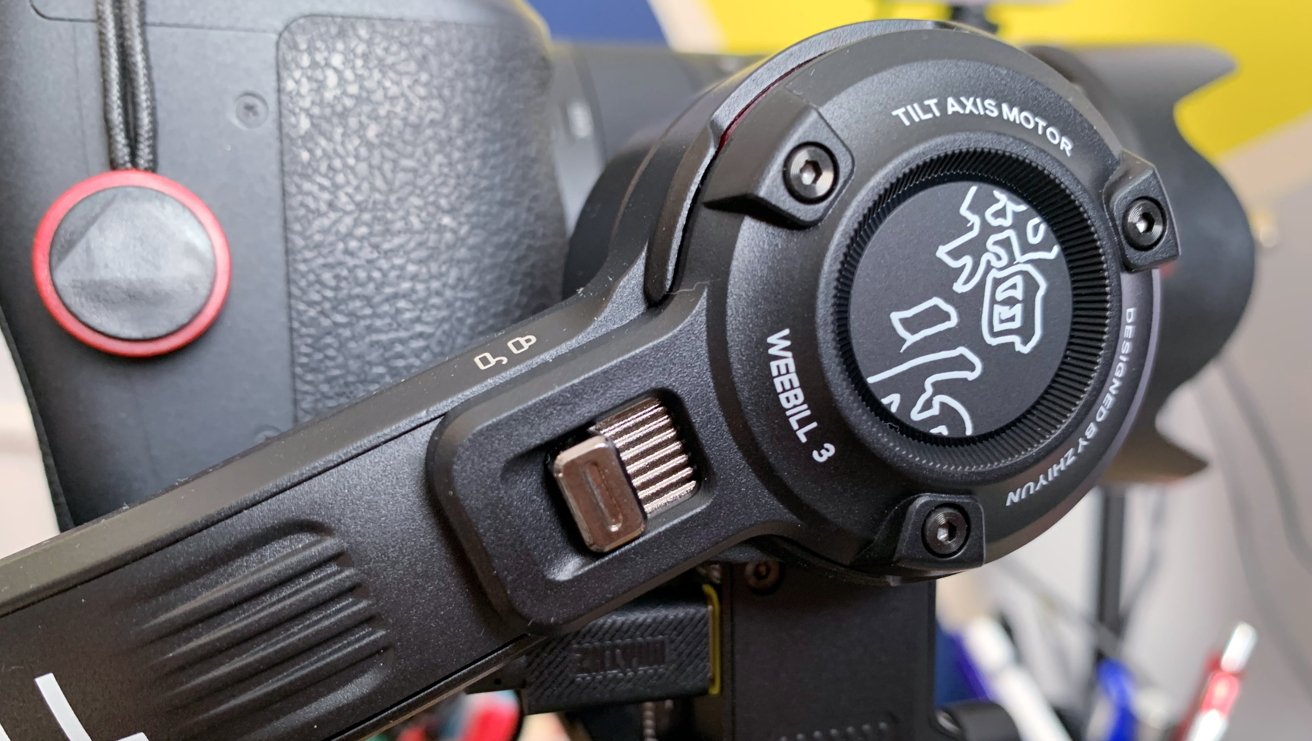 Locking switches for each motor are included once again, though this time, they are chunkier switches that seem to match the aesthetic of the gimbal more than the previous version.

A long slide-out mounting plate is used to attach the camera to the gimbal. To help turn the screw in the plate, Zhiyun has included a magnetically-attached flat attachment near where it slides into the gimbal’s arms, which can be used as an alternative to a screwdriver, allen key, or coin. 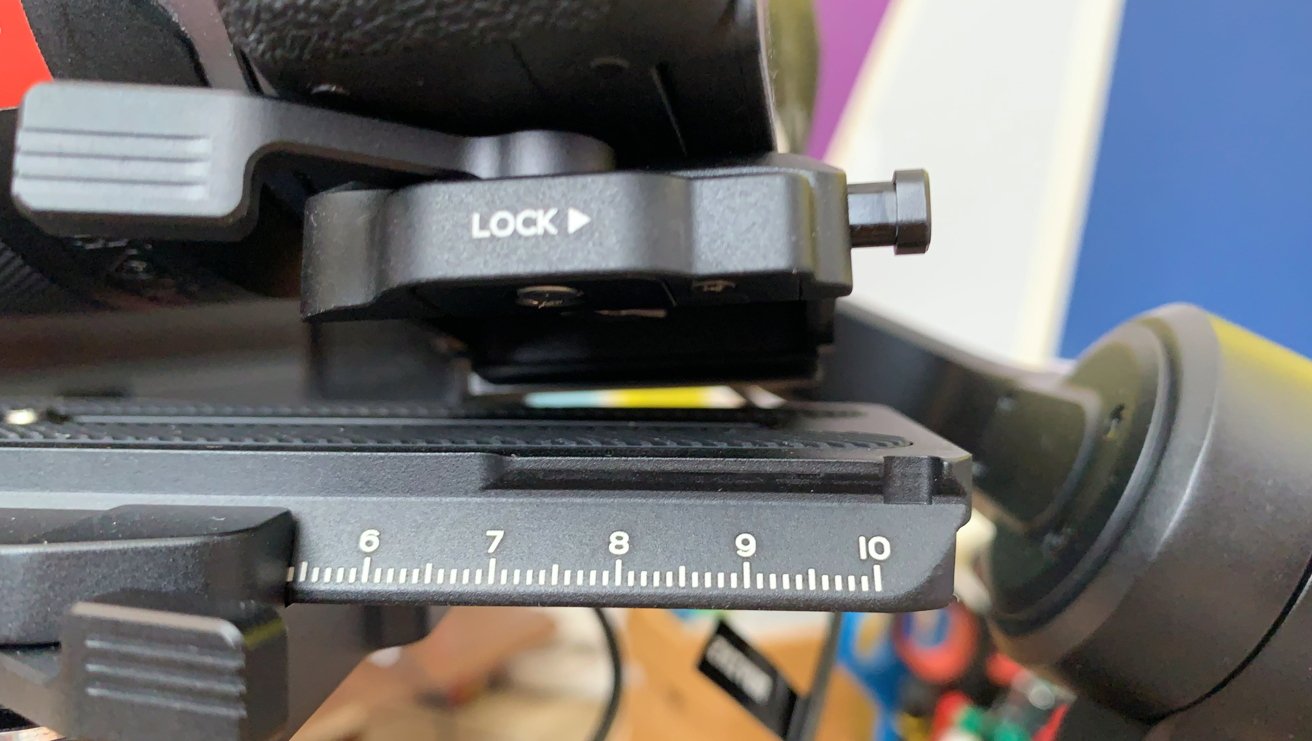 The change saves the operator from rebalancing the mounting plate every time since the quick-release plate is reattached to the same place.

The range of movement for the gimbal mechanism is very high, with 360 degrees of panning, up to 330 degrees of tilt, and 340 degrees of roll.

Two changes to the system have seemingly been borrowed from the Crane M3 to solve two elements the previous model couldn’t handle: light and sound. 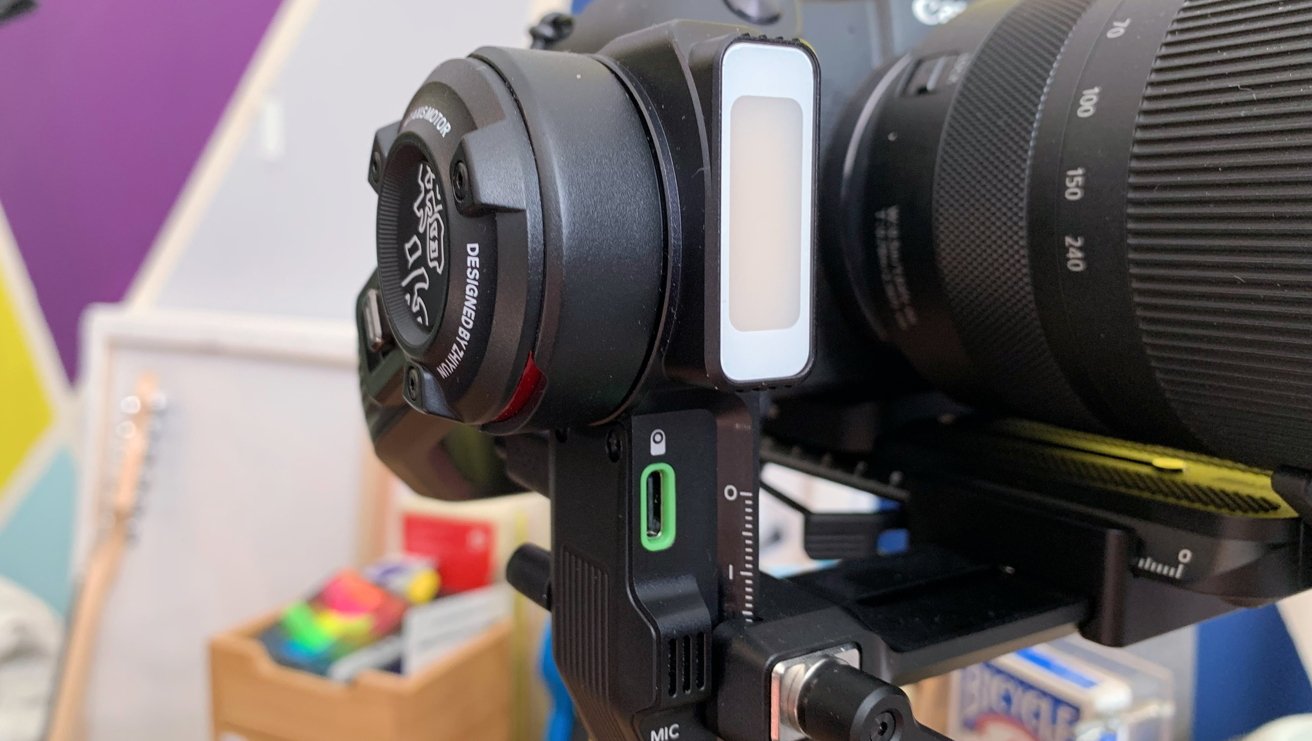 The Zhiyun Weebill 3 incorporates a light and a microphone this time around.

That light works at color temperatures between 2,600k and 5,400k, but there are a few snap-on filters you can attach for more wild color options.

It may not necessarily replace a full professional lighting setup, but it will do in a pinch.

Sound is always a problem for gimbal users, as you must rely on wireless audio systems or separate audio recordings to capture speech and environmental sounds. You don’t usually have the luxury of placing a mic on the camera directly, especially if you have a gimbal like this that works in an underslung mode since the mic would interfere with the motion of the arms at some points.

Using a camera’s built-in mic usually isn’t a good idea due to the possibility of low-quality audio and picking up all sound, including the videographer.

Zhiyun has included a built-in mic in the same place as the light, a cardioid version aimed wherever the camera is pointed and boasting a noise-cancellation function. A short cable connects that mic to the camera’s microphone port.

In testing, the quality of the mic is better than that of the camera’s built-in microphone, making it a worthwhile addition. Again, this isn’t the ideal solution, and a wireless mic setup would still offer higher audio quality for video projects.

The key term for Weebill’s control system is accessibility, with the majority of essential controls needed during recording operable by the user’s right hand when that same hand holds the gimbal.

In the middle is a compact monochrome display that provides essential information to the user, such as the mode they’re using and the remaining battery life. On the left, controllable by the thumb, is a joystick for shifting where the camera is pointed at, a record button and a mode button. 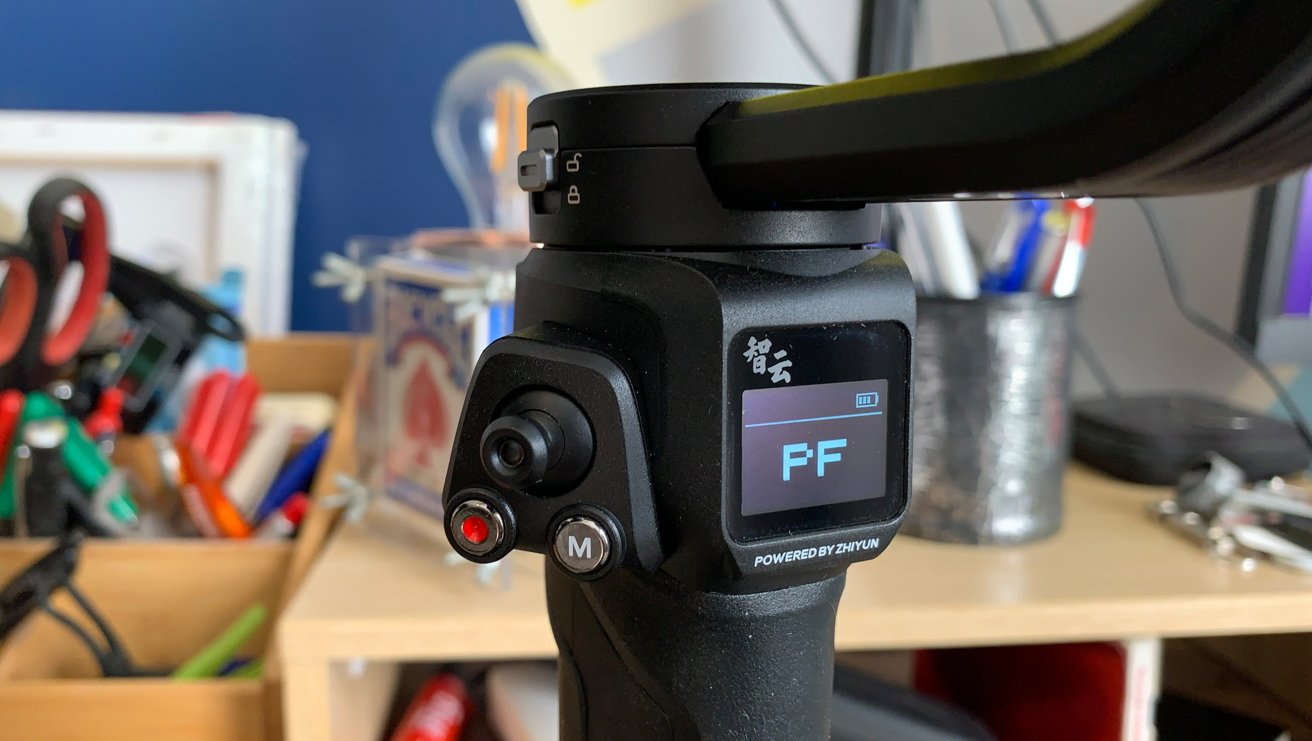 The left-hand controls of the Zhiyun Weebill 3 are easily reached by the right hand’s thumb.

The Vortex and Portrait modes point the camera directly upwards, so users have to hold the gimbal at a 90-degree angle. This is very useful for the Vortex mode, since it can roll the camera around for a unique and creative shot.

A seventh mode, Go, is triggered by a long press of the front trigger. That same button also uses multiple presses for actions, with a double tap recentering the gimbal and a triple press shifting to Selfie mode. 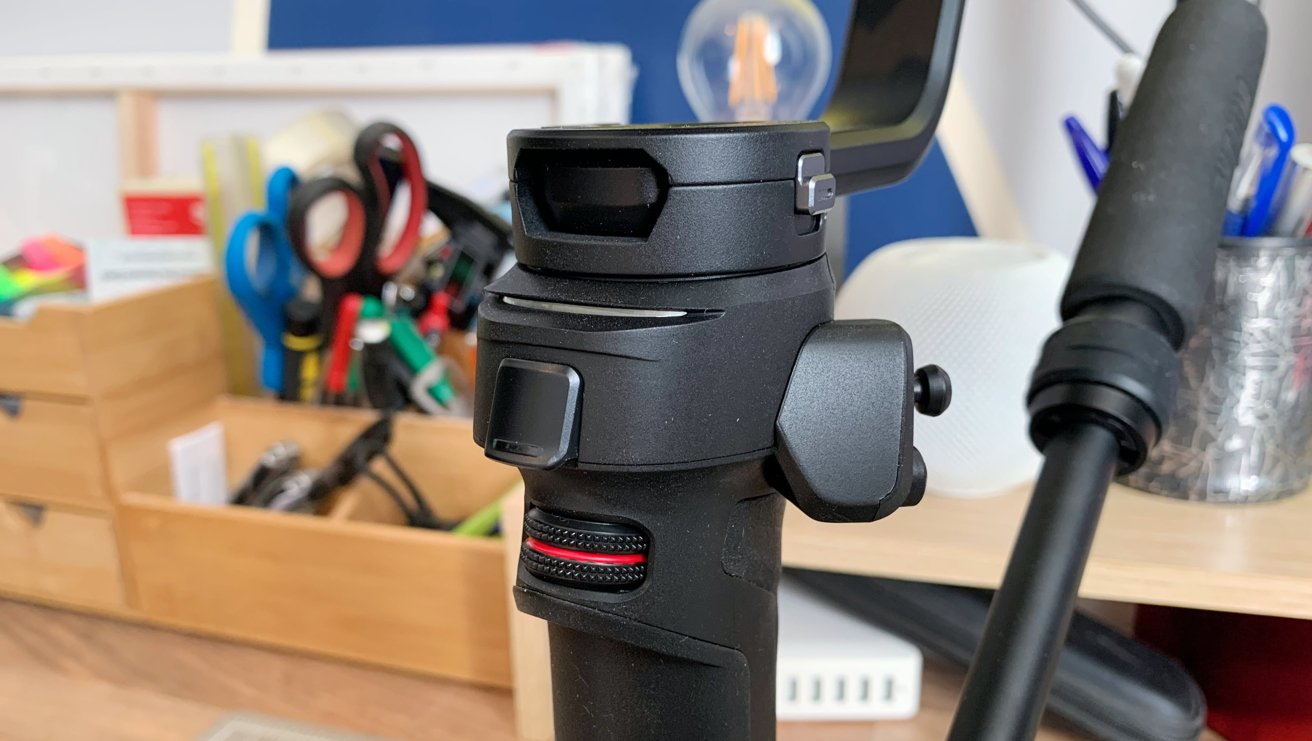 A trigger button and another scroll wheel to the front of the Zhiyun Weebill 3.

A control wheel is also at the front, which can manage the camera’s roll, though it can also be configured to perform other actions.

The Menu button is near the light wheel on the right, which isn’t easily pressed when the gimbal is used one-handed. This opens up the menu system on the compact 0.96-inch display, navigated using the light wheel, and handles various functions. 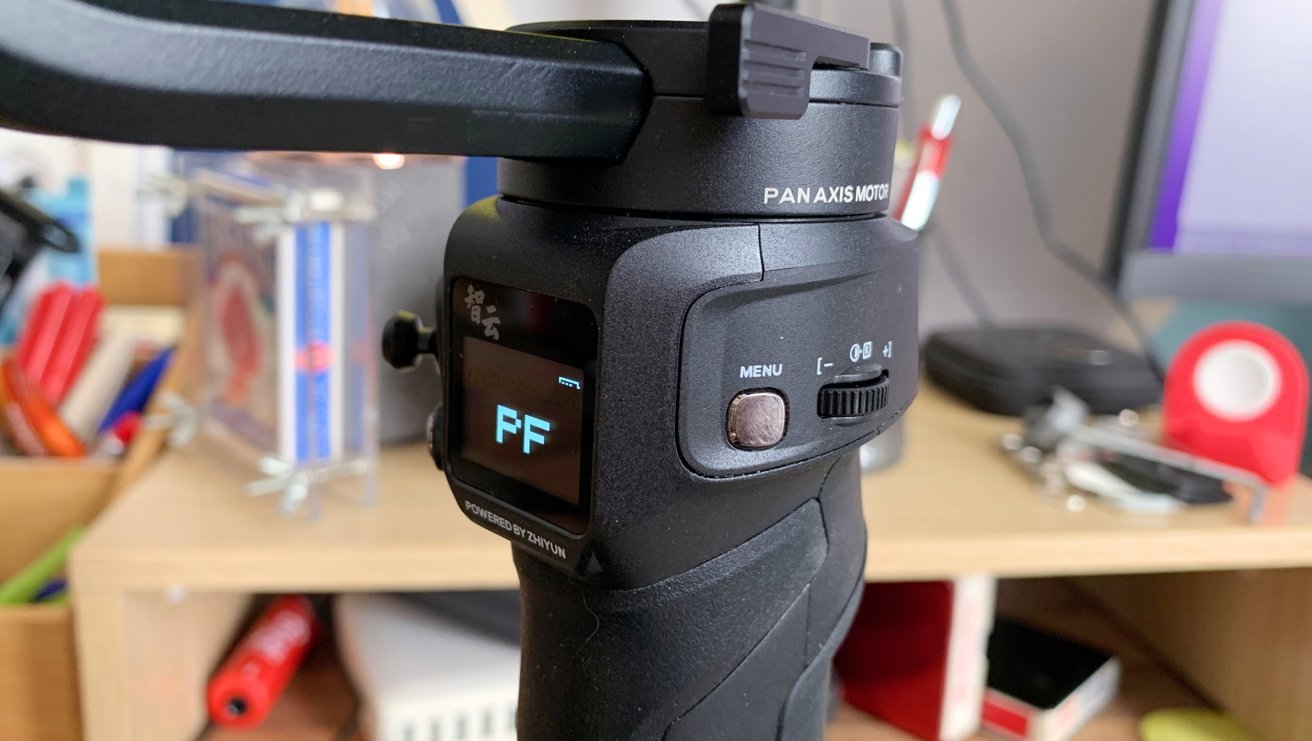 The menu manages the motor settings, movement speeds, dead banding, wheel and trigger controls, and other options and features.

Battery life for the gimbal is up to 21 hours from a single charge, making it capable of handling a full day and almost a whole night of filming in one go. Charging occurs via the USB-C port in the base, which can be fast charged to 100% within two hours.

Like earlier models in the range, the Weebill 3 can be controlled by a companion app. ZY Play for iOS connects to the gimbal over Bluetooth, giving you control over the camera’s motion from your iPhone or iPad.

The ZY Play app lets you control the Zhiyun Weebill 3 from your iPhone or iPad.

There are sliders, a software joystick, options for switching between the different modes, a motion-control system, and battery indicators, along with telling the camera to start and stop recording.

While it is entirely usable as a gimbal for filmmaking in its own right, more adventurous users can spend more on accessories to go with the Weebill 3. The TransMount Image Transmitter and MasterEye Visual Controller are accessories that add more of a professional edge to the gimbal.

The TransMount Image Transmitter, which can be attached to the Weebill 3 discretely, can send a live video image from the camera to the companion app. This gives a second operator a clear view of what is being filmed and the opportunity to manage the camera and the gimbal’s movements while the Weebill 3 is being moved by someone else. 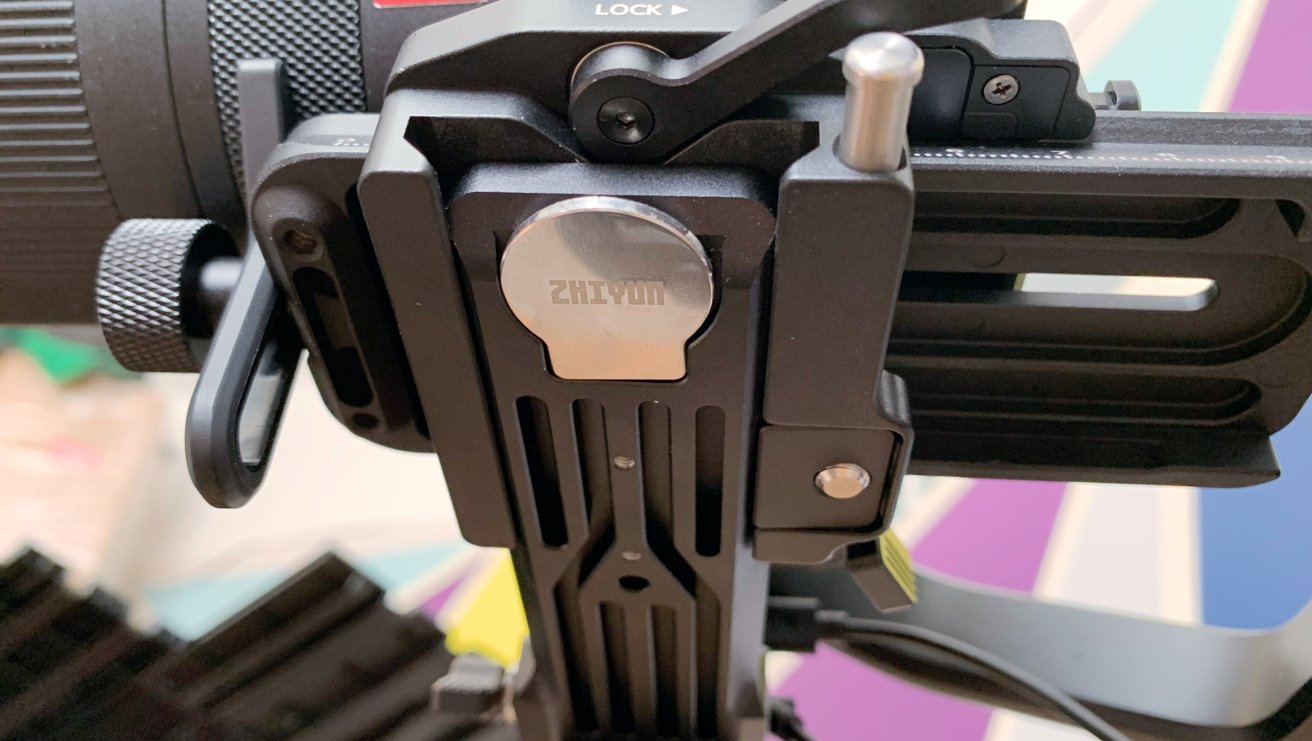 A magnetically-attached tool is included to make removing the camera from the mont much easier.

You can also transmit the footage to the MasterEye Visual Controller, which provides the same ability to view footage and adjust the camera and gimbal remotely, but in an even more professional package.

Zhiyun also produces a focus motor that you can attach to the assembly, allowing for remote changes of focus and zoom by turning the rings on a lens.

There is always an opportunity to build beyond what Zhiyun provides, but where you go with it depends on your needs.

The standard package consists of the Weebill 3, the tripod, a quick-release plate, fill light filters, lens support, assorted cables, and an EPP storage case, priced at $449.

If you want the wrist rest, the extendable Sling Grip handle, and a backpack, that will cost you $529.

The Weebill 3 builds upon a legacy of impressive cinematography gimbals with features that can help professionals get the shot they need. Making it easier to handle and with an extremely long battery life has resulted in an excellent handheld accessory capable of being used for extensively long shoots.

The usefulness of the wrist rest cannot be underestimated. 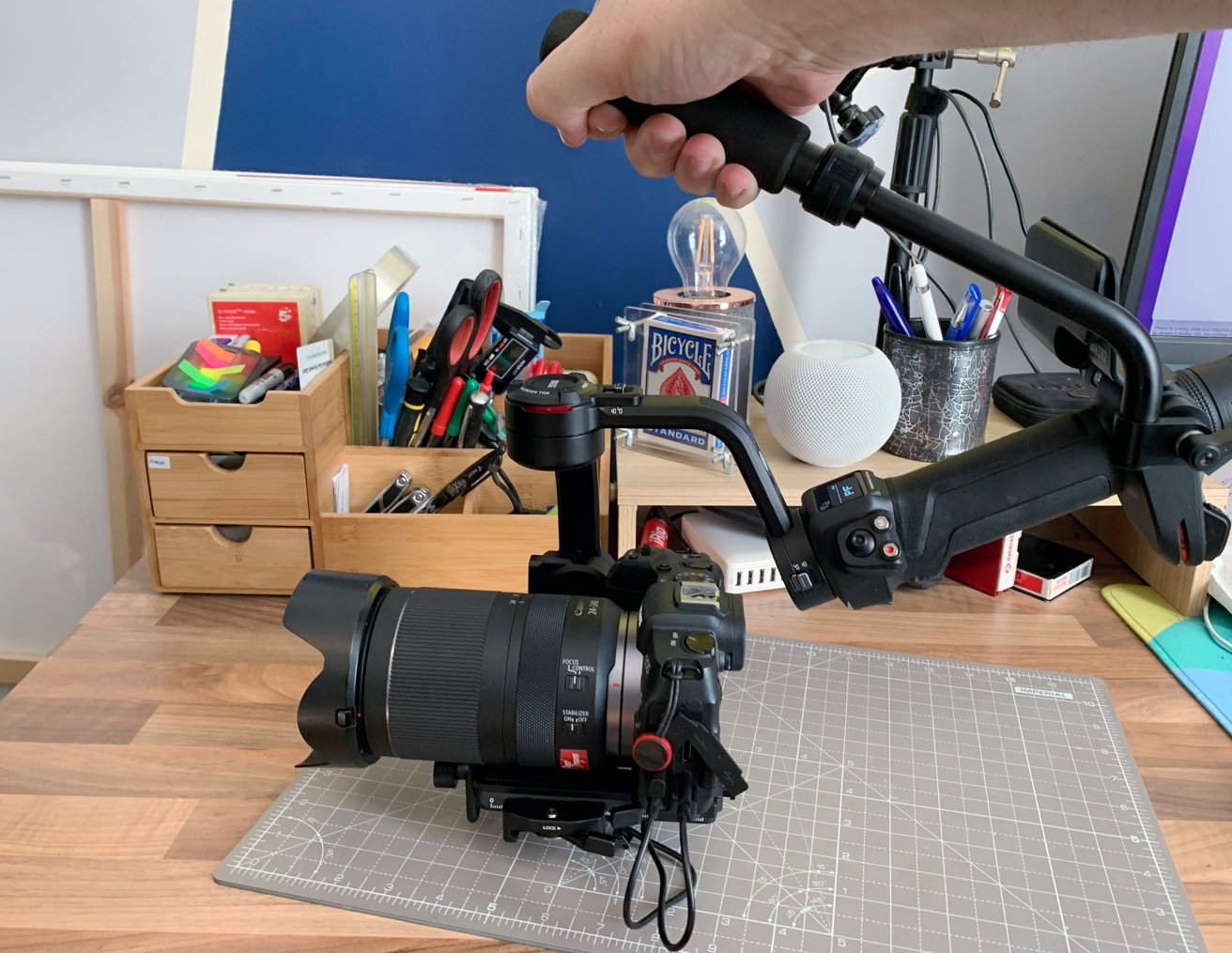 The Zhiyun Weebill 3 with Sling Grip in an underslung configuration

At the same time, Zhiyun has also made changes to make the Weebill 3 package even more useful for smaller videography teams and those who want to make it big on YouTube. It has a very easy-to-understand interface, coupled with a more robust design.

Adding in the light and microphone may not be that useful for high-level creative professionals, but for those producing for YouTube, it’s a great help.

The Weebill 3 is a radical rethink of what a gimbal should be and how it could be used. Doing so while also making it less tiring for users to wield is even better.

You can also pick up the Combo Kit for $529 at the retailers above.