If you’re moving from an old iPhone to a new iPhone 14, there are steps you need to take to make sure all of your data comes with you. Here’s how to get it done.

You can set up a new iPhone as exactly that, a completely new iPhone without any previous data like documents, or settings such as email accounts. That’s what you have to do if it’s your first smartphone, and you might want to do it even later.

It’s not what you have to do when you’re coming from Android, though. Since 2018, Apple has had you covered there with its Android app, Move to iOS.

But most of the time, when you are switching to a new iPhone, you want it to have all of your data, all of your stuff, that was on the old one. Since that does range from photos to credit cards in Wallet, and from a hundred options like Focus Modes and ringtones, you need help.

Broadly, what you do is prepare the old phone — by making a backup of the data on it, for instance — then during the setup of the next one, you transfer that data.

The first thing to do

If you have an Apple Watch paired to your old iPhone, unpair it right now. Trust on us this one, you can end up in knots if you haven’t unpaired it before, say, giving that old iPhone away.

Plus you want your Watch to work with your new iPhone, and that means having all of the Watch’s data survive the transfer, too. And the only way to make a backup of your Apple Watch data is to unpair it from your iPhone.

Apple Watch does get backed up periodically anyway, but when you unpair it, you force a backup to be made at that moment. Depending on whether you have music and podcasts stored on the Watch, it could take a few minutes, but it’s essential.

Follow the AppleInsider guide to backing up your iPhone for all of the details, and especially for how you choose between backing up to your Mac or to iCloud.

The best way to move to the new iPhone

The best way is the one that Apple will prompt you to do, a method called Quick Start.

Turn on the new iPhone and place it next to your old one. Just as iPhones recognize, for instance, AirPods, so the two phones will spot each other.

Your old iPhone will ask if you want to use your current Apple ID to set up the new iPhone. It is.

Or if it isn’t, if you want to start using a different Apple ID on the new iPhone, be absolutely sure that’s what you want. For you can’t later merge Apple IDs, and you’ll also be better off setting up this iPhone as a completely new one.

Next, you will be prompted to confirm that this new iPhone is the one you want to transfer to, and that’s done in a very Apple Watch-like way. Just as introduced with the Watch, you are required to hold the new iPhone so that its camera can see an animation on the old one’s display.

When that’s done, you will get a prompt on the old phone saying Finish on New iPhone. 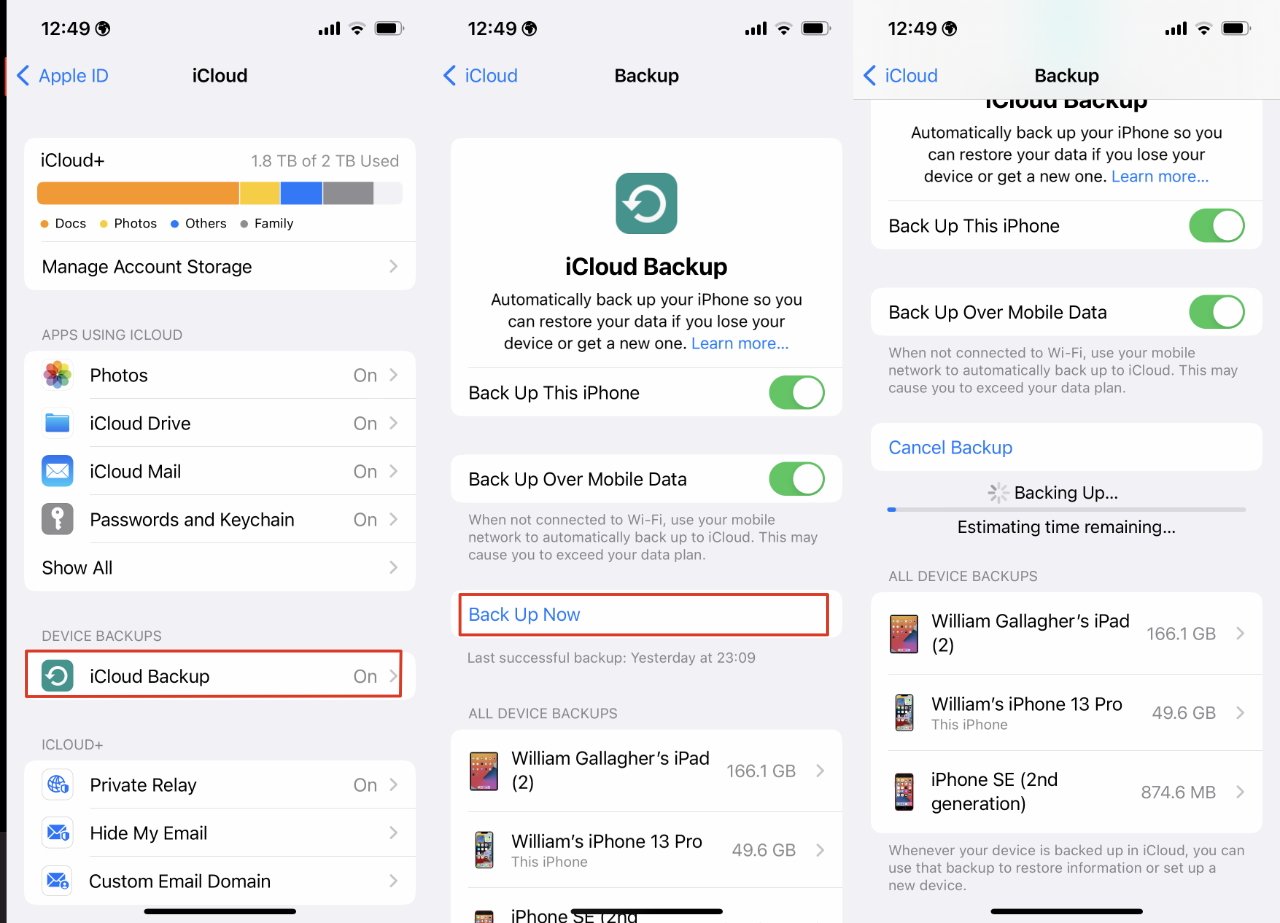 The quickest of Quick Starts

Next you’ll be prompted to tap on Transfer Data from iPhone. Apple expects that to be what you want and it can be, but because you’ve made a recent backup, you have other options.

In fact, tap on the words Other Options. When you do that, you’re offered the choice of transferring your data via you recent iCloud backup, or from a backup on your Mac.

If you backed up to your Mac, plug the new iPhone in to that and choose to transfer data that way. This will be the fastest, though you may only notice that if you have a lot of data to transfer.

Or you could choose to transfer from the iCloud backup. In that case, you’ll be shown a list of the last few backups and naturally you should chose the most recent.

Alternatively, you could just tap on that Transfer Data from iPhone. In that case, the new iPhone will copy data directly from the old one, over your Wi-Fi network.

You could have a lot of data to transfer and if you have, don’t expect this to be fast. If you’re going from a 1TB iPhone 13 Pro Max to a 1TB iPhone 14 Pro, and you’ve filled that storage, do this overnight.

The end result is all that matters

Whichever way you choose to transfer your data, the result is that your new iPhone has everything that your old one did. It may have taken a time to get every bit of data across, but you can now use the new iPhone exactly as you did the old one.

You just need to also paid your Apple Watch with it.